The Alchemist Code Wiki
Register
Don't have an account?
Sign In
Advertisement
in: Multiplay, Events, Event Archives,
and 2 more

Multiplayer quests are quests that can be completed with multiple players instead of with multiple units of your own. There are 4 slots available for most multiplayer quests (it is possible to start with less than 4). Each player can select one character to use in the quest. The quest can’t be started until all players present indicate they are ready.

If a player disconnects during a multiplayer quest, their account is played by the game AI until they reconnect. If all players disconnect, the match will automatic cancel.

Notes for the hosting player:

Note for newer players: You should not join any multiplayer quests labeled hard or EX hosted by other players until you are at least level 60 and have mastered the job of the character you are using. These quests are usually very difficult and require coordination and a strong team (often with a specific character composition). If you really want to complete these quests for the milestone rewards, you can host and offer in your comments section to spend gems to continue in case of failure- sometimes players will be willing to carry you through a difficult quest if you are willing to gem. You can also use mercenaries to help you through the quest.

The standard multiplayer format has 4 slots for players- each player can bring one unit. Only one unit is required to start the quest.

There are a few multiplay quests which are designed to be completed by 2 players instead of 4. Typically these quests allow you to select 2 units per player to bring. Currently the only permanent 2 player multiplay quests available are the Sacred Stone Memories - Records from the Battle of the Chosen series of quests and the 2 player version of the Blood Wolf by Any Other Name available for unlocking in the event archives.

There are also some 2 player multiplay towers that exist and occasionally run as a special event - none are permanently available. These allow you to select 2 units and a sub, and are found under the Trials section when available.

To do multiplayer quests on auto, you can manually toggle the auto setting directly inside the quest. If you prefer to default to auto, click on the "Battle" button on the left side after joining/hosting a quest (before you actually start the quest) and you can adjust your default battle settings.

If you wish to restrict access to a multiplayer group there are 2 options to do so: 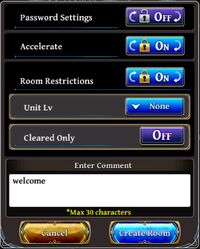 There is also a first meet gem bonus given out for the first 50 different players you meet doing multiplayer quests. The rewards are sent to gifts.